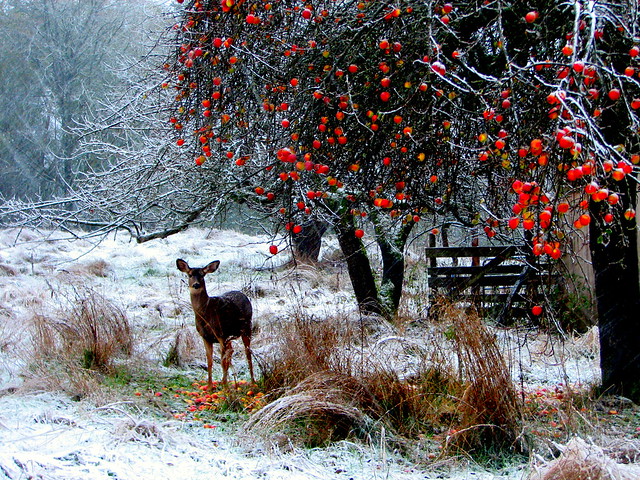 Karen Wilk of Forge Canada has a wonderful, and deeply theological, reflection appropriate for this season. She says that, since our God exists in Trinity, three Persons who are not mixed together, that there is a sacred space between and among the persons of the Trinity. This is a pretty cool concept. But, what’s really cool is how the incarnation can be understood as entering that space:

During the seasons of Advent and Christmas, we reflect on this Divine Space. By becoming one of us, the Son stepped into the space between Father/Creator and humanity. The Incarnation affirms for us the wonder and mystery of a God who is willing to make Godself vulnerable, available and graspable. It also reminds us that we live in a space between.

By becoming flesh, Christ joins us in our space between, as being made of mud that also bear the divine image (Genesis 2:7). Jesus, the Incarnate One, does more than embody this space, he enlivens and directs it. He is the great shepherd in the midst of the sheep. He is the High Priest who mediates, reconciles and makes a way in the space between for His flock to do the same.

Jesus led from amongst his followers. He called them his friends (John 15:14,15). Likewise, the role of the Christian leader is not to stand over and above such a space but rather to inhabit it.

Missional leaders nurture authentic friendships with those whom they seek to lead. They come alongside, and serve one another in community with mutual trust, honor and love. Missional leaders do not impose their views. They seek, listen to and receive the gifts and insights of all who inhabit this space between.

Instead of a posture of command and control, missional leaders come side by side and even underneath. They demonstrate Jesus’ teaching and example that friends lay down their lives for one another (John 15:13.) Missional leaders can do no less.

This is the nature of love and God is love.

So, it is during this season of the incarnation that we are reminded to enter into the “space between” in our lives and in our neighborhoods. We leave the spaces of our “church,” our “ecclesia,” and move out into the world. After all, that is what our God does.